The ALS Hope Foundation presents: The Concert of Hope
Join us for a musical evening of opera classics! The artists of Phénix Opera Company have flown in just for us!

Media, PA: Dr. Stephen Senderoff was a composer, scientist, and ALS advocate who lost his life to ALS in 2016. This year’s Concert of Hope was created to honor Dr. Senderoff, who was instrumental in raising awareness for ALS and putting together events for the Hope Foundation such as a previous “A Concert of Hope” that took place in 2010.

In 2013, Dr. Senderoff spoke after receiving the Courageous Heart Award:

“When a disease is curable, most doctors can administer the cure. When a disease has no cure, no one can cure you. But you can heal. The team led by Dr. Terry Heiman-Patterson at the MDA/ALS Center of Hopeare master healers. They heal the incurable, and bring light and hope into a place of frightening darkness.”

Throughout the evening, there will be a variety of musical entertainment. Phénix Opera artists will visit from the San Francisco Bay to headline our event. Artistic Director of Phénix Opera, Osvaldo De Leon Davila, will lead the musical celebration at the piano, joined by sopranos Elizabeth Patterson and Maria Caycedo. The Concert of Hope will feature three chamber works for soprano by Dr. Senderoff. In addition, our opera divas will sing classics by Mozart, Puccini, and Bernstein.

Not only will there be opera artists, but also accordionists! We are pleased to announce that our very own Dr. Terry Heiman- Patterson will perform with her family of accordionists. Dr. Terry will be joined by husband Bob and son Justin, as well as daughter Elizabeth, our previously mentioned opera singer. 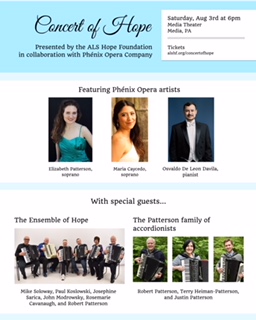